GST, being value added tax system, imposes tax at every stage of value addition and at every stage there may immerge distinct or new commodity which may be subject to tax at different rates of GST. One of the primary reasons behind introduction of GST was to eliminate the cascading or “tax on tax” effect prevalent in earlier indirect tax regime. As we have variety of rate of taxes under GST, mainly 0%, 5%, 12%, 18% and 28%, implemented in India law makers envisaged a situation where inwards supplies are taxed at higher rate in comparison with rate of tax on output supplies. Classic example of the above situation is rate of tax on synthetic or artificial filament yarns being taxed @12% whereas fabric made out these yarns is being taxed @ 5%. In the country like India where variety of tax rates are implemented, it is very difficult to achieve the real benefit of implementation of GST by removing cascading effect. In fact, in many cases supplies which are exempt from GST becomes more costly to consumers rather than supplies taxable at lower rate of tax.

Inverted Duty Structure is a situation where the supplier pays higher rate of tax on its input supplies, and pays comparatively lower rate of tax on its output supply. Consequently, a large amount of credit of tax paid on input supplies is accumulated. This would result in cascading effect of taxes if loaded to product cost with consequent increase in the cost to consumer which is against the basic principle of GST being a consumption tax. 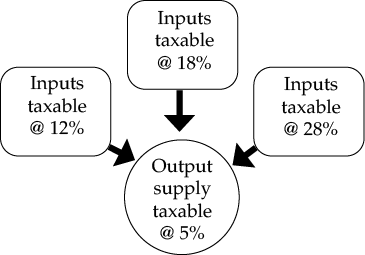 Section 54 (3) of the CGST act, 2017 envisage a situation where the credit has accumulated on account of rate of tax on inputs being higher than the rate of tax on output supplies (other than nil rated or fully exempt supplies), except supplies of goods or services or both as may be notified by the Government on the recommendations of the Council. For ease of understanding section 54 (3) of the CGST act, 2017 is reproduced below:

54 (3) Subject to the provisions of sub-section (10), a registered person may claim refund of any unutilised input tax credit at the end of any tax period:

(i) zero rated supplies made without payment of tax;

(ii) where the credit has accumulated on account of rate of tax on inputs being higher than the rate of tax on output supplies (other than nil rated or fully exempt supplies), except supplies of goods or services or both as may be notified by the Government on the recommendations of the Council:

Provided further that no refund of unutilised input tax credit shall be allowed in cases where the goods exported out of India are subjected to export duty:

Provided also that no refund of input tax credit shall be allowed, if the supplier of goods or services or both avails of drawback in respect of central tax or claims refund of the integrated tax paid on such supplies.

Although plain reading of sub-section (3) of section 54 allows refund of unutilised input tax credit and seems to have very wider applicability, but there are three proviso’s to this sub-section and specially first proviso narrow down the section applicability only to the extent of two scenarios as mentioned in that proviso. Case (ii) mentioned in first proviso relates to refund in a case which is popularly known as inverted duty structure.

There are three types of inward supplies defined under the GST law being ‘input’, ‘input services’ and ‘capital goods’, but the law makers have chosen only ‘inputs’ for comparison of rate of tax with output supplies. In place of ‘inputs’ if ‘inward supplies’ word could have been used then the situation would have been different all together.

Rule 89(5) deals with the refund in such situations and in the case of refund on account of inverted duty structure, refund of input tax credit shall be granted as per the following formula:

Explanation:- For the purposes of this sub-rule, the expressions –

Explanation to Rule 89(5) of the CGST Rules, 2017 restricts the benefit of such refund only to the extent of the ‘goods’ procured by the supplier and that too excluding capital goods. This means that the refund of input tax paid on ‘services’ cannot be availed.

Hon’ble Gujarat High Court had the occasion for judicial scrutiny of the above provisions in the case of VKC Footsteps India Pvt. Ltd. vs. UOI -2020 (7) TMI 726 and held that the above Explanation is ultra vires to the provisions of the Act as the CGST Act categorically provides that refund of ‘unutilized Input tax credit’ and Rules cannot go to disallow a benefit which is granted by the parent legislation.

Recently Hon’ble Supreme Court in the case of Union Of India & Ors. Versus VKC Footsteps India Pvt Ltd- 2021 (9) TMI 626 – SC, upheld the judgement of Madras High Court in the case of TVL. Transtonnelstroy Afcons Joint Venture vs. UOI (supra) and held that having considered this batch of appeals, and for the reasons which have been adduced in this judgment, we affirm the view of the Madras High Court and disapprove of the view of the Gujarat High Court.

So far as issue related to calculation of Net ITC for the purpose of quantification of refund amount as per rule 89(5) is concerned, that controversy seems to has been settled by the Hon’ble SC and the Net ITC shall include ITC related to ‘Inputs’ being goods other than capital goods and excluding ‘input services’ only.

Another controversy has arisen due to Circular No.135/05/2020 – GST dated 31st March 2020 where the CBIC has clarified that the benefit of refund under inverted duty structure is not available where the input and the output supplies are the same. Relevant para 3.2 of the above circular is reproduced below:

There are many instances of reduction of rate of tax under GST or where concessional rate of tax has been prescribed for supplies to certain specified recipient for example Concessional GST rate on scientific and technical equipments supplied to public funded research institutions has been prescribed by Notification No. 45/2017 – Dated: 14-11-2017 – CGST (Rate). These types of rates variation accumulate credit with the traders and there is no alternate mechanism provided for the same.

The concept of refund under inverted duty structure is contentious, complicated and difficult to implement. This was also accepted by the Hon’ble Finance Minister in her budget speech 2021 and the relevant para 176 of the budget speech 2021 is reproduced below:

Recently in the 45th GST Council meeting held on 17th September 2021 following decision has been taken as per the press release dated 17.09.2021, which is worth considering to understand the complexity of the issue related to the inverted duty structure:

“Council decides to set up 2 GoMs to examine issue of correction of inverted duty structure for major sectors and for using technology to further improve compliance, including monitoring.”

From the above discussion it’s clear that controversies relating to inverted duty structure are not going to end soon and any efforts done to mitigate the issues related to inverted duty structure may further increase the confusion and complexities, unless single GST rate is worked out for most of the goods and services barring very minimal exceptions and now after having experience of revenue collections for more than 4 years that seems to be not very difficult.