“The erudite Nani A. Palkhivala was a noted authority in taxation law, an eminent jurist and most of all, a noble human being. A Moot Court competition in his memory is a fitting testimonial to this great legal Luminary”

“Shri Nani A. Palkhivala was a legend in the filed of Constitutional and Income Tax law and was also a Professor of this prestigious institution. This great son of India fought to keep alive the light enshrined in the Constitution. This Competition is a befitting tribute to him – the lawyer par excellence”

Nani Palkhivala was a towering figure in law and life. He sprang from a humble origin but rose to unprecedented heights. Whatever he touched became a relic of lustrous diamond. His life furnishes an eloquent example of how a handicap can be converted into an accomplishment. He suffered from writer’s cramps, which he utilized to cultivate a phenomenal memory. He spoke annually on the Central Budget without so much as a suggestive note. And, he argued the celebrated Keshavananda Bharati case in the Supreme Court for twenty-six consecutive days with only one page of notes before him. God had gifted him nothing. Whatever he did, and the world-wide renown which he earned, was the result of his hard dint of work and spirit of commitment.

The most endearing quality of Nani was his innate simplicity. What distinguished him from many other lawyers of our times was his sense of fairness, his profound mastery of the Indian Constitution and his amazing knowledge of the written and unwritten Constitutions of the leading nations of the world. The memory which I would like to share is that when we both ended our happy five years’ stint as part-time lecturers in the Government Law College, we were given a warm farewell full of praise, to which Nani responded by saying, “We learnt more when we taught brilliant students like you.” What I cherish most about Nani is his sense of humility, his commitment to whatever he undertook and, above all, his abiding belief in equity and fairness. His wife Nargesh lent a grace to his life and they were both a picture of generous hosts.

I will end this brief account of a distinguished life with an interesting story. Nani had invited an Ambassador for dinner when I and my wife were also invited. Nani had obtained the choicest whisky from an Embassy. He opened the bottle and with the first sip, he said, “I think the drink is adulterated.” Nargesh said : “Nani, Nani, do not mind. I have got one from the market.” And, lo and behold, it was as genuine as Nani. 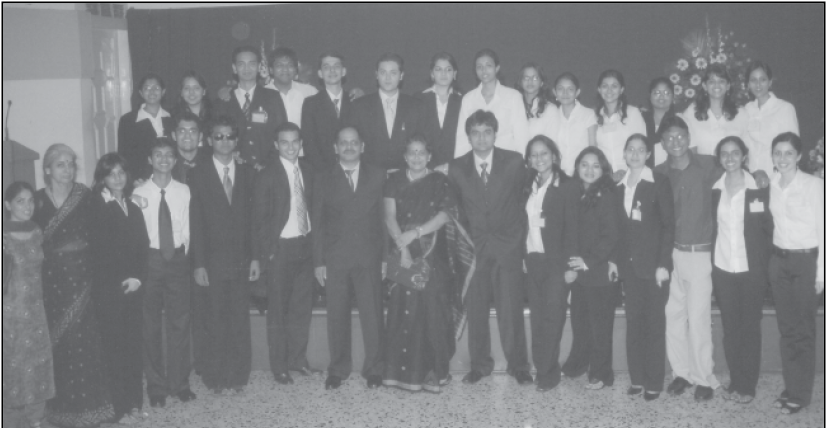 The environment in which Nani grew and established his reputation was in the chamber of Sir Jamshedji Kanga, a towering legal personality. When Kanga completed sixty years of practice, Chief Justice M. C. Chagla unveiled his portrait in the Bombay High Court Library describing him as the “uncut diamond of the Bar”: “uncut” because he was so child-like, never childish. Nani revered and doted on his Senior. It was but natural then that a good deal of Kanga’s qualities would rub off on to his illustrious junior: his phenomenal memory, his innate simplicity and his high sense of values, even his forgetfulness for names! Nani would call, quite confidently, someone by a name he never possessed. But he did it so guilelessly that it did not cause offence!

I started practice in 1951 — in Kanga’s Chambers. It was a crowded place; with only seven tables for the seven seniors, all immensely successful. Nani was then eight years in practice, already a “boy wonder.” He had a table to himself but with space just enough to hold conferences with one client. When more clients were present, Nani would confer with them in his car parked outside! He could work anywhere; always brilliant, never pretentious. He worked, and walked, at break-neck speed. I remember on one occasion when he was rushing from one Court to another navigating the right angle turnings in the corridors of the Bombay High Court (where you cannot see who is round the corner) and collided with C. K. Daphtary, then Advocate General. Never at a loss for words, old CK smiled and raising his arm said, “Get your Palkhi out of the way.” Oblivious of the humorous pun and muttering a few apologies, Nani rushed on, fast-forward!

So “fast-forward” was he in the profession that when he had not yet-turned fifty, the Chief Justice of India, Justice S. R. Das, invited him to become a Judge of the Supreme Court of India — directly from the Bar, an honour which Nani declined. If he had accepted, he would have been (hopefully) Chief Justice of India for an unbroken period of fifteen years. Missed opportunities? Perhaps. But then Nani went on to become a huge success in the profession and in public life. Almost single-handedly, he saved our Constitution from being amended (by a majoritarian Parliament) as to take away its basic democratic features. And his name became a household word with the citizens of India. To the common man (and woman) who read the daily newspaper, he was “our Nani” – a champion of human values, of freedom and liberty, an exponent of how best to run the Government of the country.

But so fickle is public opinion, that when the same Nani embarked on a political career and stood for Parliament elections in a constituency in Bombay City, he was defeated — which soured his views on politics and politicians, and on adult franchise; views which he had the courage to express, but which earned him the reputation of an “elitist”, which he was not. When he returned to India after a brief, but successful stint as India’s Ambassador to the United States he resumed his corporate connection with the Tatas. A mistake? Yes, definitely his opinions on men and matters, always frankly expressed, would have been much better received by the people of India if he had not been associated with large international corporations.

One personal quality that I always recall is Nani’s genuine affection and overwhelming kindness to people around him. I have never heard him speak ill of anyone, and if someone did say something nasty about him, he would not take it ill.

Nani never did forget that he started from the bottom, working his way upto the very top. When he began his career, he had no godfathers in the profession. Phenomenal energy, hard work and a fantastic brain was all he had, and as it turned out, all he needed to have. But he always remembered the plight of the poor and the needy. His silent contribution to the welfare of hundreds of persons and causes is known to but a few; only because he was so richly endowed like Sir Jamshedji (his great leader) with that essential quality of HUMILITY, an abiding trait of those who are both good and great.

If Nani had a fault it was that he was far too preoccupied with the concerns and chores of the moment. “What is this life if full of care, we have no time to stand and stare?” asked the poet. Nani had “no time to stand and stare.” In fact when he was young and burdened with briefs, he literally filled the unforgiving minute with sixty seconds worth of distance run — always in high gear, always at top speed.

I always admired Nani’s phenomenal energy. TIME was his greatest competitor. He would have outwitted Time if he had the strength. But alas, he lost the battle. The devouring hand of Time slowed him down, and in the end outwitted him — as it will outwit each one of us.

At eighty-two, a great lawyer, an even greater human being had passed on; leaving behind a profusion of goodwill and fond memories.

“The Voice of Conscience of the Nation”*

All these attainments to which I have referred testify to Palkhivala’s brilliance, his eminence, his versatility, his phenomenal memory. But the quality of greatness which we rightly attribute to him lay in his basic human qualities. The foremost was his willingness to help persons in need without any show or publicity. Let me recount one instance. Dr. Badrinath of Shankar Netralaya, the famous hospital in Chennai, was invited for dinner at his home by Nani. After the dinner was over, Nani escorted the doctor to his car and gave him a small envelope saying this was a token contribution for the hospital. When the doctor later opened the envelope, he found in it Nani’s personal cheque for ₹ 2 crores.

Let me recount another instance. As a tribute to Jayaprakash Narayan, who played an outstanding role in regaining freedom for India after the nightmare of the Emergency, in June 1977, Palkhivala founded the Jayaprakash Institute of Human Freedoms. The purpose of the Institute is to strengthen the roots of Indian democracy and to carry on the epoch-making work of that great patriot. A sum of ₹ 5,37,000 representing the entire profit from Palkhivala’s seventh edition of The Law and Practice of Income-tax was donated to this Institute.

Palkhivala was not attracted by the rituals and the ceremonies of a religion. He believed in and practised the essence of Zoroastrian religion to which he belonged, namely “Humata, Hukhata, Huvarashta” – good words, good thoughts, good deeds. Sri Aurobindo was his favourite writer and thinker whose writings greatly attracted him. He embodied the concept of plain living and high thinking. Success did not go to his head. Fame and fortune did not increase the hat size of the legendary Nani Palkhivala. There was never a trace of arrogance or conceit or pomposity in him.

Another outstanding human quality about Nani was that jealousy, or rather envy, the besetting sin, which cannot countenance the fame and success of others, never consumed him. “Holier than thou” attitude was alien to him. He was not the one to smile and shake your hand and thereafter stab you in the back. Backbiting and denigration of others were unknown to him. Humility and natural modesty were his hallmarks. He had no ego problems. The warmth of his friendship extended to all fellow human beings, whatever be their status in life. He was tender towards the bashful, gentle towards the distant, and merciful towards the absurd. Nani fulfilled Newman’s definition of a True Gentleman. Of Nani, it can be truly said that he walked with Kings, yet lost not the common touch.

The greatness of Palkhivala truly lay in his sincerity and commitment to spiritual values which made him a moral force in our public life. The fearlessness with which he spoke out, whichever be the party in power, made him the Voice of Conscience of the Nation. And conscience for Nani was not an alibi but an ally, a constant anchor of his beliefs and actions. He kept the faith and held high the banner of Freedom and the Rule of Law. He fully shared the belief of Justice Frankfurter that “Democracy is always a beckoning goal, not a safe harbour. For freedom is an unremitting endeavour, never a final achievement”.