“Late Shri N. A. Palkhivala was a legend in the filed of Constitutional and Income Tax law and was also a professor at this esteemed Institution. This competition is a befitting Tribute to his legacy”

“Late Mr. Palkivala was a great constitutional and tax lawyer of the Country. The Tax Moot Court Competition 2008 has created awareness amongst the law students about the values and ethics practiced by Shri N. A. Palkhivala”

“A lawyer knows ( or at least, is supposed to know !) the law. An advocate is one who can persuade the judge to accept what he submits is the law. The importance and the relevance of the holding of moot courts is that they sharpen the ability of the student -participant to think on his feet and to meet the point which the judge may put to him. Every day is a day of examination for the arguing lawyer- the difference being that whilst in an examination one has time to think on a problem and write down an answer, when arguing a case the answer has to be immediate. It is trite to say that the importance and relevance of holding a moot court is no longer a moot question!”

You made me think global and inspired me to be an International Tax lawyer. You taught me lessons of honesty and humility. You influenced my philosophy of life and work. Your lectures at Brabourne Stadium every year matured my career in comparative law and creative research. Your office at Bombay House and mine next door at Calcot House made us greet each other every morning and meet regularly. I don’t know how to thank you for the contribution you made to me and millions like me. But if I could carry forward a piece of your legacy to the next generation. I shall feel I returned a cent of what you gave me.

Remember this picture for which my wife Swati, you I posed together at the Bombay Airport when you took off for the United States as India’ Ambassador 1977? “ 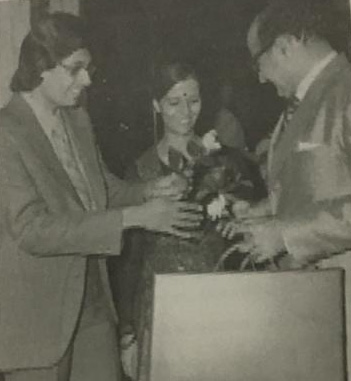 What separated Nani Palkhivala from other lawyers of his time?

His humanitarian attitude in life. The fact that he valued human values in a person above all other qualities.

His razor sharp intellect, phenomenally retentive memory and insatiable thirst for knowledge in varied fields made him extremely popular among the youth.

What, in your opinion, would be Nani A. Palkhivala’s vision for India?

Nani Palkhivala’s vision for India was that of an independent India in which each citizen and each state was dependent on each other – a country full of Indians and not just Maharashtrians, Gujuratis, Tamilians, Oriya’s etc.

How would Nani Palkhivala’s legacy be best preserved?

His legacy would be best preserved by practising unstintingly the values he preached and practised during his life.

Nani Palkhivala’s legacy would be best preserved for years to come by ensuring that the principles he stood for are not lost and creating the vision he had for India, i.e. of a democratic country where everyone has equal opportunity.

“He walked with kings – but never lost the common touch.”