“The professional and intellectual contribution of Shri N. A. Palkhivala in the filed of tax laws and the immense service rendered by him to the nation as a constitutional lawyer will always be remembered with gratitude and admiration. Moot Court Competitions area an ideal platform for young students to attempt tackling the intricacies of the subject and Court craft. Besides acquiring a thorough knowledge of tax law, these are an excellent opportunity to develop advocacy skills and professional ethics. The experience will prepare them to work as part of the Tax Bar of International Standard”

“Late Shri Nani Ardeshir Palkivala was the President of the Income Tax Appellate Tribunal Bar Association from 1968 to 2002. Shri Nani Palkhivala fought for his country and his countrymen not only in Indian Courts but also in International Forums. He is a legend in the filed of Income tax and Constitutional law. He was a former Professor and student of the Government law College, Mumbai. The Moot Court Competition is a fitting tribute to his legacy.”

“Nani A. Palkhivala – A Legend of tax profession – The object of the Nani A. Palkhivala Memorial National Tax Moot Court Competition is to make aware the contribution of late Shri N. A. Palkhivala in the process of nation building, and to encourage the young law students to enter the filed of tax litigation practice”

“The standard of argument which was advanced by the participating teams from 26 different colleges, the preparation of the paper book and presentation of arguments and submissions for and against made us feel that the upcoming lawyers are being trained to achieve great success in their profession.”

With the unsurpassable nature of sheer advocacy demonstrated by Nani Palkhivala there seems to be no doubt that he was genetically coded to be an outstanding lawyer. His meteoric rise as an advocate coupled with a lasting impact he has had on law as an institution is probably unparalleled in the legal history of the country. Innate talent Nani Palkhivala undoubtedly had but extraordinary hard work was a greater factor that contributed to his success. Nani Palkhivala valued time and his ambition inculcated a limitless inner energy that kept him going.

His knowledge of accountancy, quick grasp and analytical abilities enabled him to handle the intricacies of tax laws. He seemed to have a natural affinity inclination to these cases. Appearing in some of the landmark cases and putting forth novel arguments each time he has most definitely contributed to shaping the destiny of our country in more ways than one.

When one speaks about the growth of income tax it is needless to say that Nani Palkhivala must be mentioned. The two are synonymous and one would wonder where tax would stand if their paths had not collided. That explains the magnitude of his impact in the sphere of taxation amongst multiple others. The two have evolved almost simultaneously, together having contributed immeasurably to the country. It has therefore most definitely been a two way influence. Nani Palkhivala and his works continue to be an authority on tax in India and will continue so for years to come.

The Law and Practice of Income Tax

The ‘Law and Practice of Income Tax’ has through its several editions, established itself as the most definitive work on the subject of Income Tax. Its primary focus has been the exposition of the principles governing Income Tax Law and keeping up with the multiplicity of amendments right up to the present.

Palkhivala reached the pinnacle of success very early in his prolific career as a legal luminary. He realised early that there was no good book on Income Tax, and set about writing one as early as. The famous book co-authored by with his mentor Sir Jamshedji Beharamji Kanga, running into several editions has completely changed the take on income tax in the country and created a standard in itself.

Nani Palkhivala wrote the book by systematically examining every relevant reported case and making extracts and notes on them. His way of compiling the commentary was extremely methodical, lucid and systematic and great attention was paid to detail. He insisted upon meticulous cross-checking of references. His ability to evaluate the tax policies, study and scrutinize the reforms is unmatchable and clearly brought out in his book. The preface of each edition was unique and engaging. He protested over the ‘chronic tinkering’ of the Act and lamented that it has twisted out of shape and lost its direction.

The last passage of the last preface written by Nani Palkhivala reads:

“Every Government has a right to levy taxes. But no Government has the right, in the process of extracting tax, to cause misery and harassment to the taxpayer and the gnawing feeling that he is made the victim of the palpable injustice.”

In the preface to various editions of his commentary on Income Tax, Palkhivala laments on the fact that the amendments to our tax laws and consequences therein are not given much heed. He strongly criticised unjust policies and unfair strategies put forth by the Government. It is indeed sad that his criticisms made over the years have more or less been in vain.

Chief Justice Chagla while hearing income tax references referred to it as “The Book”; and often when a ticklish question of law arose on which precedents were silent, he would ask, ‘What does the book say?’ The Highest Taxed Nation, published a fortnight before the presentation of the 1965-66 Budget in Parliament, compelled the Government to redraft part of the Budget on an emergency basis simplifying the maddeningly complicated tax-structure, and later to bring down the tax rates from the vertiginous heights.

It’s unbelievable to imagine that Nani Palkhivala as a child would struggle to say even a few words when years later his post budget speeches kept 100,000 people spellbound at Brabourne stadium in Mumbai. Palkhivala made his first budget speech in 1957 and has been a critic of innumerable amendments and policies related to tax laws ever since.

Palkhivala utilised these opportunities to reach out to the layman who would come from places just to hear him speak. His speeches had a profound, lasting impact on those who heard him. He would address pressing issues pertaining to the budget post its announcement. Being so well versed with the subject it was not surprising that he was able to capture the attention of the audiences instantaneously. He delivered his speeches extempore, having an effect manifold.

His historic speeches since 1957 have drawn national attention and only an extra-ordinary human being could make something as dry as budget so meaning and attract the tremendous audience he did. The far-reaching and percolating effect of his views have been massive and unparalleled and even to the present day are considered and looked upon with great amount of reverence and admiration. He was truly an inspiration, an institution within himself. Dr. William Emerson, a collateral of the famous American writer, observed that if such a speech was given in the USA, people would hold discussions for days on the points made and newspapers would carry articles about them. When Nani spoke, the venue itself became the parliament of the people.

Although Nani Palkhivala’s contribution to Constitutional Law is immense, he shot to national fame at a young age only as a Tax Lawyer. The cases that Nani Palkhivala has been a part of have seen new principles being laid down, judgements of the court being recognised as landmark verdicts and many decisions affirmed by the Supreme Court. 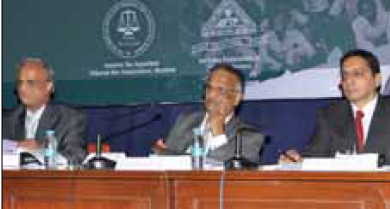