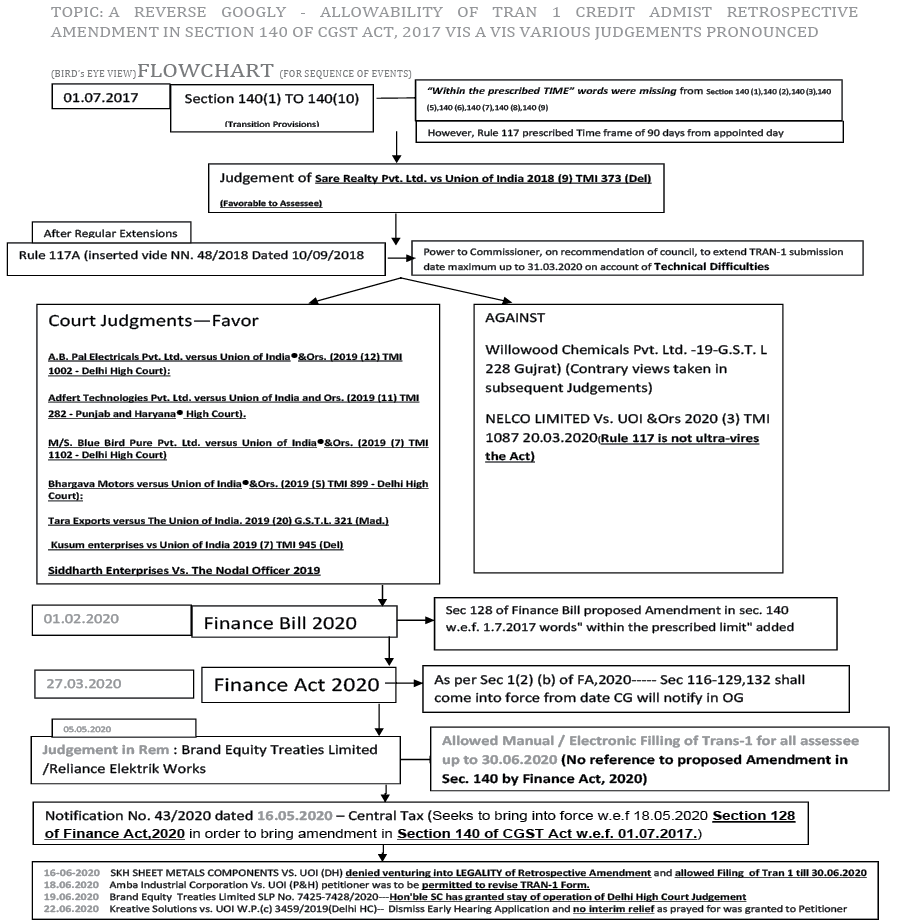 ANALYSIS OF ABOVE EVENTS:

1.2 Facts:– There has been delay in filling of Form Trans 1 and factual situation in each one of present case is different and is substantially distinguishable from cases where relief already granted on the ground that the delay was not on account of Technical glitch on the portal, but due to technical difficulties at the end of assessee.

The case relates only to the Transitional Credit u/s 140(1) i.e. Credit as per
Return immediately filed before appointed date.

1.4 Arguments of the Department:–

Permitted to file relevant TRAN-1 Form on or before 30.06.2020. Respondents are directed to either open the online portal so as to enable the Petitioners to file declaration TRAN-1 electronically, or to accept the same manually. Respondents shall thereafter process the claims in accordance with law. We are also of the opinion that other taxpayers who are similarly situated should also be entitled to avail the benefit of this judgment.

The other decisions as referred above for allowing transitional credits are discussed as follows:

The other side of the coin as referred above, the judgements Against allowing belated transitional credits are discussed as follows:

The power of the government to make retrospective law cannot be denied but however is a limited power. The legislature cannot set at naught the judgements pronounced and overturn these by amending laws not for purpose of making corrections or removing anomalies but to bring in new provisions which did not exist earlier. The mute question is whether Statutes dealing with Substantive/Vested Rights can be retrospectively amended.

However, there are judgements favoring Retrospective Amendments like R.C. Tobacco Pvt. Ltd. 2005 taxmann.com 1137(SC), ACIT vs. Netley ‘B’ Estate [2015] 56 tamann.com 436(SC). Moreover, Sec 164(3) of CGST Act, gives the power to give Retrospective Effect to any of the rules made from a date not earlier than the date on which provisions of this Act comes into force.

5 JUDGEMENTS IN DUE COURSE:

Where, the judgement of Brand Equity Treaties Ltd., was pronounced before the amendment to Section 140 was made effective , the following two judgements have come in due course after the said amendment made effective.

Despite all, the fact is that, still there are a number of questions that are unanswered like jurisdictional restrictions of High Court decision, validity of Retrospective Amendment, preparedness of GSTN, extensions pertaining to arbitrary approach of Government, the burden of Legislative Errors be borne by Financial Costs and adverse implications to assessee and will be settled in due course by the Hon’ble courts.