In order to support and enable Companies and Limited Liability Partnerships (LLPs) in India to focus on taking necessary measures to address the COVID-19 threat, including the economic disruptions caused by it, Ministry of corporate Affairs vide its general circular No 11/2020 announced certain measures in order to reduce compliance burden and other risks on companies. In the said circular it was announced that no additional fees shall be charged for late filing during a moratorium period from 01st April to 30th September 2020, in respect of any document, return, statement etc., required to be filed in the MCA-21 Registry, irrespective of its due date, which will not only reduce the compliance burden, including financial burden of companies/ LLPs at large, but also enable long-standing noncompliant companies/ LLPs to make a fresh start’.

Companies Act 2013 requires all companies to make annual statutory compliance by filing the Annual Returns end Financial Statements. Apart from this, various other statements, documents, returns, etc are required to be filed on the MCA 21 electronic registry within prescribed time limits along with prescribed filing fees.

In furtherance to Ministry’s Circular No 11/2020 dated 24.3.2020 and in order to facilitate the companies registered in India to make a fresh start on a clean state, the Ministry has issued a circular No 12/2020 dated 30.3.2020 granting one time opportunity to companies to complete the pending compliances by filing necessary documents in the MCA 21 registry including annual filing without being subject to hire additional fees on account of any delay .

To give an opportunity for the defaulting companies and to enable them to File the belated documents in the MCA 21 registry, the central government in exercise of powers conferred under the Companies Act 2013 has decided to introduce scheme namely Companies Fresh Start scheme, 2020 ( CFSS – 2020) ( referred to as “the Scheme”) condoning the delay in filing the aforementioned documents with the Registrar, insofar as it relates to charging of additional fees and granting of immunity from launching of prosecution or proceedings for imposing penalty on account of delay associated with certain filings. Only normal fees for filing of documents in the MCA – 21 registry will be payable in such case during the currency of CFSS-2020. 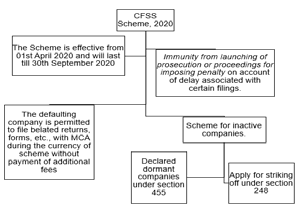 Details of the scheme are as under: