1.1 Money is any item or verifiable record that is generally accepted as payment for goods and services and repayment of debts in a particular country or socio-economic context. The main functions of money are distinguished as: a medium of exchange; a unit of account; a store of value; and, sometimes, a standard of deferred payment. Any item or verifiable record that fulfills these functions can be considered as money.

1.2 OECD paper “ The Bitcoin question: Currency v. trust less Transfer Technology”-Money is historically an emergent market phenomenon establishing a commodity money, but nearly all contemporary money systems are based on fiat money. Fiat money, like any check or note of debt, is without use value as a physical commodity. It derives its value by being declared by a government to be legal tender; that is, it must be accepted as a form of payment within the boundaries of the country, for “all debts, public and private”. The money supply of a country consists of currency (banknotes and coins) and, depending on the particular definition used, one or more types of bank money (the balances held in checking accounts, savings accounts, and other types of bank accounts). Bank money, which consists only of records (mostly computerised in modern banking), forms by far the largest part of broad money in developed countries.

1.3 Before introduction of money, barter system was in existence. The use of barter-like methods may date back to at least 100,000 years ago, though there is no evidence of a society or economy that relied primarily on barter. Instead, non-monetary societies operated largely along the principles of gift economy and debt. When barter did in fact occur, it was usually between either complete strangers or potential enemies.

1.4 On the face of it crypto-currencies could be thought of as meeting all of these “money” roles. They are (as are many things) a potential store of value, albeit a very unstable one. They could be used as a unit of account and, as the earliest known use of a bitcoin retail transaction was to buy a pizza, they can be used as a medium of exchange for anyone willing to accept them. In this latter role they have significant advantages, as they can be divided digitally for any size of transaction and they avoid the high fees charged by credit card companies. But it is likely that the main reason crypto-currencies are ‘taking off’ in acceptability as a means of payment is due to the anonymity feature. The high degree of anonymity feature has great advantages for illegal activities such as money laundering, avoiding financial regulations, terrorist financing and evading taxes.

1.5 The financial crisis led to a loss of trust in many financial intermediaries, trading platforms and payment systems. The main innovation of crypto-currencies is the feature of trust-less transactions (the ability to avoid the need for a trusted third party). Barter is always possible – window cleaners could negotiate with shops, doctors’ surgeries and farms to exchange hours or cleaning for goods and services. However, barter is a poor medium of exchange and cleaning cannot be meaningfully stored (and hence isn’t a store of value). Casino chips, airline miles, Amazon credits, Disney money could also be used for some functions outside of their primary intended use, but not with the potential usability features of crypto-currencies in the digital age.

1.6 Crypto-currencies can never become an alternative to legal tender, for the simple reason (as will be explained below) that people have to pay their taxes. This protects existing fiat currencies from being displaced, and the fear of loss of monetary control should not be used as an argument to prevent bitcoins from circulating as parallel currencies. However, the technology of the digital payment protocols should not be confused with the parallel currency issue.

1.7 With respect to the currency function, there are two potential policy issues: (a) consumer protection issues: e.g., electronic theft; a collapse in value of crypto coins say due to the emergence of substitutes; the use of government plenary powers to ban them, etc.; and (b) anonymity features permitting an expansion of socially unacceptable activities such as tax evasion and money laundering. The digital transfer technology, on the other hand, could play highly-socially useful roles.

2.1 Digital currency, or Digital Money, is defined as a means of payment or exchange that occurs in electronic form, with transactions recorded electronically. The traits of digital currency are similar to traditional currencies in that they can be used for payments on purchase or sale of physical goods & services, transferred across locations, and stored in wallets or accounts.

2.3 Virtual currencies are defined as the digital representation of unregulated money that is neither issued by a Central authority nor associated with “Fiat currency”(currency established by government regulations) and which are used and accepted among members of specific groups. Examples of virtual currencies are loyalty points, Facebook credits, amazon coins and frequent flyer programmes.

3.1 Bitcoin a compendium of conceptions, software engineering, cryptography and economics that form the fundament of a digitally workable money schema. Bitcoin works on a concept so mathematically impregnable that once you dive to interpret the working, it will only leave you awestricken. It is indeed hard to apprehend its kernel and significances with only a picayune look at it, as is typically seen by almost all of us.

3.2 It was in the year 2008 when a paper titled ”Bitcoin-A Peer to Peer Electronic Cash System” got published under the pseudonym Satoshi Nakamoto via the Cryptography mailing list. The most adept thing about the concept knowm as Bitcoin is that, it doesn’t need Satoshi Nakamoto anymore to survive, continue and exist. It is purely peer-to-peer version of electronic cash that would facilitate online payments to be sent instantly from one party to another without the burdens of going through a financial institution.

3.3 Bitcoin is a decentralised crypto-currency and a peer-to-peer payment system released as open source software wherein transactions, duly verified by network nodes are recorded in a public distributed ledger called a Block chain takes place between users directly, without an intercessor or third party engagement.

3.4 Bitcoin isn’t like some gilded piece of metal or like distinctive paper money either. No one prints it, no one server or person controls it, is hard to counterfeit but instead, bitcoin counts exclusively on a decentralized computer network and some awe-inspiring efforts of cryptography. As mentioned above, the entire bitcoin system runs on P2P(peer-to-peer) network that is similar to file sharing networks like the ones that allow people to distribute data of all kinds, including copyrighted music, movies or more. 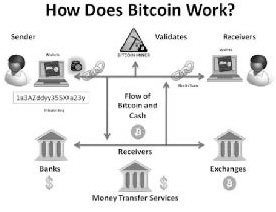 3.5 Bitcoin actually works on the concept of Blockchain.

4. Can Bitcoin be treated as a currency in India?

4.1 We have to look at the definition of currency given in Indian Laws. Indian laws do not define digital currency or virtual currency, so we will have to look at the traditional definition of currency to see if Bitcoin falls in that definition. The term currency is defined in section 2(h) of the Foreign Exchange Management Act, 1999 (“FEMA”) in the following words:“currency” includes all currency notes, postal notes, postal orders, money orders, cheques, drafts, travellers cheques, letters of credit, bills of exchange and promissory notes, credit cards or such other similar instruments, as may be notified by the Reserve Bank.

4.2 It is notable here that this is an inclusive definition which means that it has a large scope for expansion. The legislature has consciously made the definition capable of further expansion by making it inclusive and also by giving the Reserve Bank of India (“RBI”) the authority to notify other similar instruments. This means that if any instrument which is being used as a currency is not covered by the definition as it stands, then the RBI is free to notify it and include it in the definition of currency. All “currency” other than Indian currency is considered by the FEMA as “foreign currency” which would have to then comply with various rules and regulations under FEMA. This means that if Bitcoin is classified as a “currency”, it would have to come under the definition of “foreign currency” and Bitcoin transactions would therefore have to comply with the entire foreign exchange regime under FEMA.

4.3 It is clear that Bitcoin is not really similar to any of the instrume5 | CA.Shweta Ajmera

5. Is Bitcoin Legal in India?

5.1 Reserve Bank of India is the regulatory authority to regulate currency. The Central Regulatory, Legal and Operational Risks. Founded in 2009, Bitcoins are digital currencies that are not issued by any central bank or other centralised authority but by an open source software through a process called ‘mining’. RBI has till date said that Bitcoin is neither legal nor illegal. As the regulatory body has not come out with conclusion, therefore the opinion shared by us is our personal opinion which cannot be challenged or submitted in court of law.

5.2 As a layman or in common parlance, people understand Bitcoin as a currency and which is creating a wrong impression in the mind of regulatory. Bitcoin sometimes donot have a trail which will lead on money laundering and therefore regulatory bodies have not given permission for the same.

5.3 Till date Bitcoin has not been declared as legal or illegal in India.

6. Regulatory aspect of Bitcoin in India:

6.1.2 As per section 2(14) of the Income-tax Act 1961, a capital asset means a property of anykind held by a person, whether or not connected with his business or profession. Therefore Bitcoins are treated as capital asset if held for investment purpose. Therefore any gain arising from transfer of Bitcoin will attract capital gains.

GST on Bitcoin – In case of mining -(Product in electronic form can be classified as “Information technology software services – section 2(102) of the CGST Act defines “services” means anything other than goods, money or securities but includes activities relating to the use of money or its conversion by cash or by any other mode, from one form, currency or denomination, to another form, currency or denomination for which a separate consideration is charged. The term service as defined above is very broad and covers all services including information technology/ software service.

The term “Information Technology software” has been defined “Explanation (v) at para 4 of notification number 11/2017- Central Tax (Rate) dated 28-06- 2017 as “ any representation of instructions, data, sound or image, including source code and object code, recorded in machine readable form and capable of being manipulated or providing interactivity to a user, by means of a computer or an automatic data processing machine or any other device or equipment.”

Rate of tax of GST on Information technology / software service is 18%. Assessee is eligible to take input tax credit.

Reserve Bank of India is the regulatory authority to regulate currency. The Central Bank that is RBI acknowledged that virtual currencies pose challenges in form of Regulatory, Legal and Operational Risks. Founded in 2009, Bitcoins is digital currency that is not issued by any central bank or other centralised authority but by an open source software through a process called ‘mining’. RBI has till date said that Bitcoin is neither legal nor illegal. As a layman or in common parlance, people understand Bitcoin as a currency and which is creating a wrong impression in the mind of regulatory. Bitcoin sometimes do not have a trail which will lead on money laundering and therefore regulatory bodies have still no clear opinion for the same.

[Source : Article printed in the souvenir of 2 Day National Tax Conference held on 5th & 6th May, 2018 at Indore]